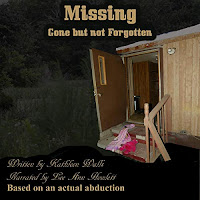 It's been a busy month or so for me but mostly because I bought a new vocal booth.  Getting it delivered (to an upstairs bedroom) and treating the inside has taken up a lot of time but it's been worth it.

My latest book just hit Audible for sale yesterday.  Missing: Gone but not Forgotten is by writer Kathleen Walls.  This is my third narration for Kathleen.

"Based on an actual abduction that has never been solved, filled with drugs, violence, and lies.

Missing - Gone but Not Forgotten is about the abduction of a little girl in a rural Florida community. Drugs, family feuds, underage sex, and lots of lies abound.

Jon unsnapped his gun from its holster but didn’t remove it. Clair reached toward the Colt Official Police Pistol strapped at small of her back and nodded at her partner to let him know she was ready and prepared for anything.

Jon rapped hard on the door, “Sheriff's Department responding to your call. Please open the door.”

When the trailer became silent and the door swung open, Clair's first thought was this was another child in the family. The person standing in the doorway was about five foot three or four, thin to the point of emaciated, with long brown hair straggling in her face. She was wearing a rumpled tee and a pair of skinny jeans and tennis shoes. Her large blue eyes with a totally blank expression gave the only hint that this was 17 year old Autumn Daily, the person reporting the missing child. She looked like she was stoned out of her mind on some strong chemicals.

Behind her loomed a man a bit over six foot in his mid-20s. He had dark short hair, a small mustache, and weighing about 160 with enough muscle to take on either detective. His knuckles were bloody as if he had been punching something, or someone. He clarified that by slamming his fist into the trailer's side. “It's about damn time you get here. Some fucker took my daughter! If I find ‘em, I'll kill 'em so you better get them first.”

“Calm down, Mr. Shatner. We're going to find whoever took your daughter but we need some background...."

You can listen to the sample and/or purchase the book on Audible here.

Posted by ClaireLA at 2:54 PM No comments:

Now available for purchase at https://society6.com/lahowlett

ClaireLA
Audiobook Narrator and Producer. Retired University Medical Librarian. Air Force brat (why I moved around so much). Movie and book lover. Into "The New Yorker" and "Vanity Fair" along with shelter mags.